Magnafolate® PRO - The best folate in the world!

Magnafolate® PRO is the purest and most potent folate in the world according to a series of tests. It has 36 months longer shelf life, 40% higher efficiency compared to the generic folic acid and also significantly reduces the health risks.

Vitamin B9 (5-MTHF) is an essential nutrient that mainly is present as folate and folic acid in different forms that are interconverted during metabolism. Folate can promote the maturation of red blood cells, improve the level of endurance during exercise, and prevent pernicious anemia. However, the loss of dietary folate in food is about 80% after processing.

How does it differ from Folic Acid?

Folic acid is a synthetic form of vitamin B9, that does not exist in nature and has no vitamin activity. It must be metabolized by enzymes before it can be used by the body.

A large proportion of the population have a genetic enzyme deficiency that prevents the proper conversion of folic acid into L-methylfolate. Taking a folic acid supplement is of no benefit to someone that cannot convert folic acid properly.

Magnafolate® is the purest folate on the planet with values above 99% while the competition is at 97,5%. This means less amounts of impurities such as other folates, residues from breakdown and oxidation and other products.*

It has 36 times longer shelf life compared to the generic L-methylfolate (also called amorphous or non-crystalline type). Magnafolate® C is also the only type of L-methylfolate can be stable at Climatic zone IV B (30° ±2, 75 % RH ±5 %. 3 year study, still ongoing).

It absorbs directly (it is an active form of Folate that doesn’t require metabolism).
It is even effective for people with MTHFR mutations. 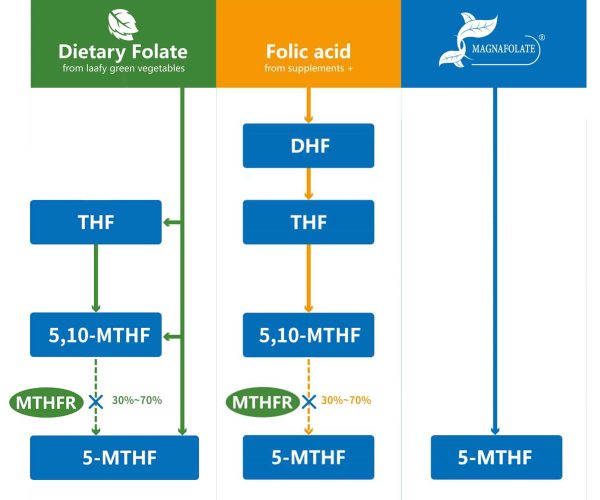 Although it is effective for many purposes, Magnafolate® is especially designed with pregnancies in mind.

• Protects Prenatal & Infertility
• Good for mental health and brain
• Improves cognition
• Enhance production of the neurotransmitters dopamine, norepinephrine, and serotonin, all linked to mood regulation
• Get rid of the toxin by recycling homocysteine to methionine
• Repairs ongoing DNA damage, and regulates the utilization of DNA.

The safest alternative to Folic Acid

• MTHFR gene mutations, stress, and other biological variations can limit the body’s ability to convert synthetic folic acid into the active form of folate.
• Over 30% of the global population has a genetic mutation to MTHFR, specifically C677T.
• Prevents the body to convert folic acid to active folate.

Foot note: What is the MTHFR Gene? https://www.healthline.com/health/mthfr-gene#_noHeaderPrefixedContent

Since it’s start, Magnafolate® has been widely recognized by the international market for its superior quality.

It sells all over the world, including the US, EU, AU, Canada, Iran and so on.

• The Most stable
With the unique C crystal form, Magnafolate® is the only one thar is stable at IVB zone* with 3 years stability data support. Except Jinkang, all the rest generic L-5-MTHF Ca belongs to amorphous type which is not stable.

• The Purest
The producer Jinkang controls all potential risky impurity into the smallest assay by a special technology and avoid using some high toxicity raw material, for example formaldehyde & borohydride, during the production process.

• The Safest
In comparison tests between known folic substances no one else comes even close to the minimal risk that Magnafolate® has.

Want to see for your self?

Put it to the test in your own production and see for yourself!